Champs and Chumps (Part One) – Glory

No Justice (Part One) – The Triumph Before the Fall

Champs and Chumps (Part Two) – The Bane of Corruption

Champs and Chumps (Part One) – Glory 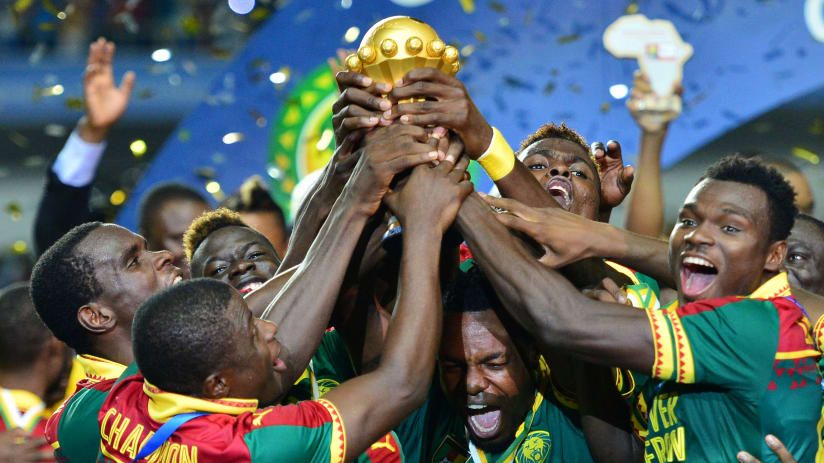 Cameroon is one of the most successful nations in African men’s football. The Indomitable Lions were the first African nation to reach the quarter finals of the official World Cup in 1990.[1] They were robbed in 1982 in their first appearance in the World Cup Finals. Grégoire M’Bida Abéga had the honour of scoring the first goal in the World Cup in the 1-1 draw against eventual champions Italy, but he should have been the scorer of the second goal the Indomitable Lions scored in that tournament. Roger Milla, later to distinguish himself in Cameroon’s greatest moment on the world stage, should have had the honour of being the first man to score for Cameroon in the World Cup Finals. In their first match against Perú in A Coruña’s Riazor Stadium, Cameroon scored a perfectly good goal disallowed.

This was the only World Cup Finals match ever refereed by the Austrian referee, Franz Wöhrer. Although he refereed two World Cup Qualification matches in 1985, it speaks volumes about the confidence that football had in him after that performance in 1982. However, he refereed other top matches but they were not in competitions organised by FIFA. Nevertheless, that poor decision had dire consequences.

I asked Cameroonian great Joseph Antoine Bell if he could go back in history and use VAR to change one decision, which would it be. “Roger Milla’s disallowed goal in the 1982 World Cup,” he replied without a second to think about it.

Cameroon is an African football giant but its administration is another matter.

Cameroon last hosted the Africa Cup of Nations (AFCON) in 1972. They are overdue to host again. They should have hosted it in 2019 after winning the right to host in 2014, but following the first CAF Symposium under former CAF President Ahmad Ahmad, the AFCON was expanded to 24 teams.

That was not the bid Cameroon had submitted successfully previously. Their bid in 2014 meant providing four stadiums to host a 16 team AFCON and te required infrastructures for accommodation, travel, etc. something they could deliver. Expanding it to 24 teams meant six stadiums plus infrastructures too. That affected the cost and preparation of necessary infrastructures with just two years to deliver.

Cameroon did not have the resources to deliver that and should not have had to. With a gun at their head – they desperately wanted to host as despite having won it four times at the time of the bid and another afterwards, none of their five triumphs had been in Cameroon. The only time they had hosted was in 1972 and their failure to win made those players –legends or not – pariahs.

Their government insisted that they would host and did not need assistance. However, the extra costs were a result of a decision by members of CAF. Consequently, the extra costs should have been borne by CAF. The controversially banned former President of Guinea-Bissau’s FA, Manuel Nascimento, argued for that. Nascimento was a vociferous supporter of Cameroon hosting the AFCON in 2019, and following its removal to Egypt for that edition, that Cameroon hosted the next one – delayed by the Coronavirus Pandemic to 2022.

But the next AFCON is shrouded in confusion. It remains unclear if Cameroon’s facilities are up to the grade and if they will host the next AFCON – due to be held early in 2022. It’s chaotic, especially as they hosted the African Nations Championship (CHAN) successfully earlier this year. But there are further problems. Its governing body the Fédération Camerounaise de Football (FECAFOOT) is part of that problem – its recent history is confusing at best and involves a rogues’ gallery.

[1] The use of the word official is deliberate. The reason is there are four stars on Uruguay’s shirt – one for each World Cup win, meaning Uruguay is credited with four World Cup wins. There were two since the start of the official World Cup in 1930. The other two were the Olympic Games Football tournaments of 1924 and 1928. The latter was more competitive than in the 1930 World Cup. Egypt reached the semi-final, finishing fourth. It is therefore the best performance by an African team in a World Cup.